At Queen Bee Gardens we have ventured out from just making honey candy. Back in the late 80’s early 90’s we ventured into chocolate. In the early 2010’s we ventured into whipped honey. In 2016 we ventured into making more use of one of the byproducts that we have an abundance of, beeswax.  We have always had beeswax for sale in the one pound block. Some customers didn’t like that size and wanted something smaller, so now we have a 1 ounce bar and a 1/2 ounce queen medallion. To let people know about the smaller sizes, we included two of the 1/2 ounce medallions in our popular Prairie Flower Gift Box. We didn’t put any labeling on it and some people tried to eat it. Everything else in box is edible, why wouldn’t this be? And since when did Queen Bee Gardens make something that you can’t eat?

As it turns out, we do produce a few items that are inedible. Don’t get me wrong, beeswax won’t hurt you. According to medlineplus.gov

“Beeswax is considered nonpoisonous, but it may cause a blockage in the intestines if someone swallows a large amount”

Anytime you eat honeycomb, you eat beeswax. According to Healthline.com:

That is what I like to do, spit out the wax after I have chewed all the honey out of it. If I happen to feel mild stomach obstructions, Clear lax is my friend.

So, now you know. If you don’t know what to do with the queen medallions that you found in your Prairie Flower Gift Box, check out the many uses of beeswax above (we meant them to be an alternative to scentsy warmers wax). And for your information, we make 20+ different candles, furniture polish and lip balms all in house. We have enjoyed venturing out into the unknown. Now, armed with more knowledge, you can also. 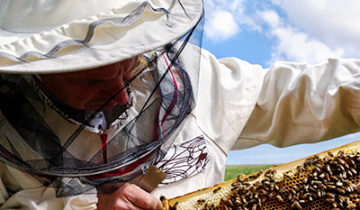 Farmers, Be Nice to Bee Keepers

No products in the cart.